Like many others (so I’ve heard/seen!), I started this blog with good intentions but immediately got waylaid with a bunch of interesting research and teaching. A mid-year resolution is to commit to writing something at least once a month! One of the challenges is that often we are working on interesting projects and not only get fully immersed, but can’t share until official publication – an example is the fascinating work we at Caribou Digital were doing for most of this year with the Indian Institute of Technology, Bangalore and funded by Omidyar Network on low-income user experiences of obtaining and using identity credentials (including Aadhaar) in India.  Together with Storythings and Langtons, we published a monthly update on www.identitiesproject.com, but more on that when the full research is out in October. Lots of useful implications (we hope!) for policy-makers and designers of ID systems on privacy, agency, and dignity, particularly for women, ethnic groups, those with disabilities and others.

In addition to the Identities research with the great Caribou team, I continued to teach MC405: Policy and Practice in ICTs and Development with Jane Vincent and Claire Milne in the Media and Communications Department at the London School of Economics, with (as always) committed and engaged students, and supervised summer dissertations at both LSE and the University of Manchester. Also prepared a policy document for UN Women with Claudia Abreu Lopes on the use of big data for evaluating the gender element of the SDGs (on the basis of which we have been recommissioned to work with UN Women’s Evaluation Office, Global Pulse and Twitter), co-wrote a chapter on inclusivity in crowdsourcing for IDRC and am in the process of co-editing a special issue on Gender and ICTs for the journal Information Technology and International Development with Silvia Masiero and Jo Taachi (we’ve had some good contributions and in final review stages). There might be other things which I’ve forgotten, but it was a bit of spinning plates in the last year (all fun and learning!).

The use of mobile internet* by girls in Lagos and Delhi 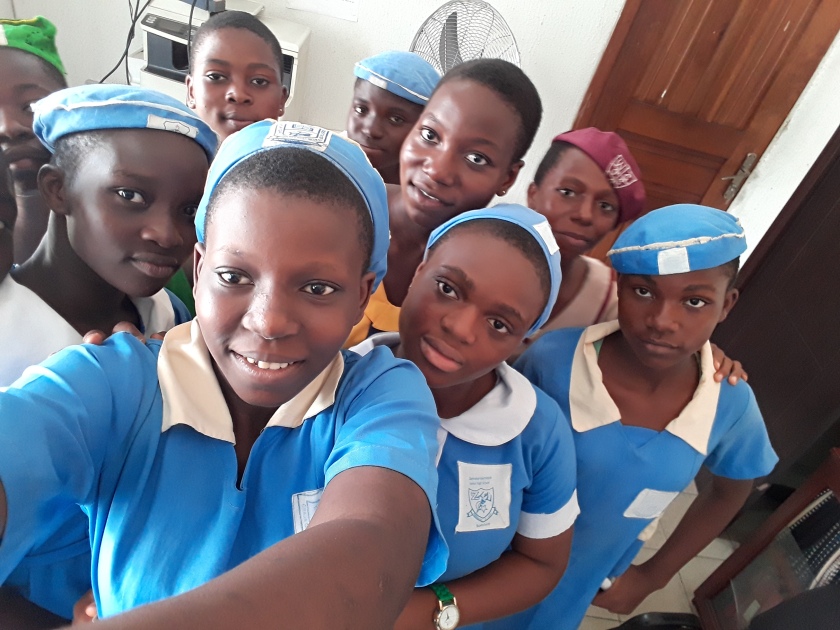 Focus group at one of the Standard Chartered Goal sites in Lagos (Photo: the girls and Adeshola Komolafe; Permissions obtained)

The one project I can share on more is a study for Standard Chartered looking at the use of mobile internet by girls aged 12-24 from low income families in Lagos and Delhi. Standard Chartered commissioned Caribou mainly to understand if there was an opportunity to bring their Goal Programme (teaching life skills to young girls in twenty markets) online.  However, as experienced ICT researchers and practitioners (!) our first recommendation was not to jump online but to take the time to understand more of the dynamics of online usage by the girls.  Between April and June 2017, Sudha Vijay and I explored issues of access, privacy and family dynamics, helped by field researchers Ananya Basu (in Delhi) and Adeshola Komolafe (in Lagos) who conducted focus groups in New Delhi and Lagos (in total of 50 girls, roughly 25 in each site), as well as interviewed family members and Goal staff. We also built on our Digital Days methodology, piloted in a previous Caribou project in Ghana, Kenya and Uganda – what does a girl’s digital day online look like – what does she access, why, what is the sequence of cycling through websites/apps, why and so on?

Some of the findings of the Standard Chartered study were specific to Goal and the girls’ experience of it, so that’s not what I’d like to discuss here (although you can read the study here). Rather, what struck Sudha and myself was that while girls long to (and often do) have access to affordable smartphones, there is a major gap in

a) in accurate self-reporting of use (i.e. they often say they don’t use phones but use those of friends/parents/brothers) and

b) unsurprising but still worrying, there is a huge lack of awareness of privacy online (at least with those we talked to)

There’s a real lack of ownership in who educates on online safety and privacy or who girls can talk to for advice (widely reported in literature but still a concern – in the report we outline the main researchers and practitioners working in this area, especially Girl Effect, UNICEF, United Nations Children’s Fund, Global Kids Online, Intel and many others).

The other two emerging findings which seemed important to us were

c) how little parents know about their children’s use online. For example, in an interview with Richu ((pseudonym), a mother in Delhi, she was adamant “my girls don’t do anything wrong” on their phones. But when Ananya, the interviewer asked the mother more she said “I don’t know because I don’t use the net”. Similarly, in another interview with Ashok, a father, he said:

Ashok: No, no my children don’t engage in any wrong activities [when the question was actually about them being have experienced any harassment online].

Ananya: Do you think that your children use the phone too much?

Ashok: No they use it when required.

Yet further along in the exchange, the interviewer asked:

Ananya: Do your children play on the phone?

Ashok: I wouldn’t know if they do.

Similarly, in an interview with a mother, Mrs. Anifalaje in Lagos, we heard:

Adeshola: Why do you think it’s good for her [daughter] to be online?

Mrs. Anifalaje: Because the assignments they give them sometimes require that they research online. I do give them my phone is such cases to assist with their assignments. I don’t have any fear of the children been corrupted through the internet because we are Christians.

Adeshola: Why do you think it’s important for people to share information online?

Mrs. Anifalaje: We learn from this information every day. For example, on WhatsApp, information helps us to know the things happening out there.

If parents don’t know or understand the online space, or put the onus on girls to be the “good girls”, this poses real challenges for young girls being online so fast.

d) The role of brothers, especially in India, was critical

In the absence of parental knowledge, in Delhi particularly (not so much the case in Lagos), the role of brothers or friend’s brothers as gate-keepers (enablers as well as disruptors) for the girls going online was prevalent. Most brothers did not want to share their phones or stopped girls from going online, but Pushpa, 16, says:

“My brother gifted the phone to me and taught me how to use it. It is important to make users aware … he thinks that since he has given me the phone it is his duty to make me aware of the important things because at times people might be led astray…so he taught me everything, Facebook, Hike, Whatsapp … like a parent.”

The Standard Chartered research was a small study, but it raises questions which arise again and again of girls in low income contexts online – how do they learn about use and safety?  If SDG 5 – one of the seventeen sustainable development goals – aims to “Achieve gender equality and empower all women and girls”, and 5.b has a goal of “Enhancing the use of enabling technology, in particular information and communications technology, to promote the empowerment of women”, how far are we in terms of safeguarding and empowering young girls in their access of mobile internet? (and we can’t argue that this is an irrelevant question – as we found, many girls underplay their access to smartphones). While we know many smart folks are working in this area, it’s a real call to governments/ministries, NGOs, private sector organizations and donors to consider how young girls learn these skills. We’d love to keep working in this area.

*though as Jonathan Donner would say, there is no such thing as A “mobile internet” but many internets

I was fortunate enough to be able to present our research at the Standard Chartered Beyond Girls’ Education Summit in Johannesburg and sit in on several discussions surrounding girls empowerment in low-income countries (of which ICTs were only a part). The privacy and safety of girls online were raised as issues by all, (especially Girl Effect)  but one of my concerns was that there’s still an emphasis on access, rather than safety. In my humble opinion, participants at the conference were more interested in learning how their initiatives could be brought online without greater thought to the underlying vulnerabilities and risks they really pose. In creating any online initiative it is imperative to educate both the platform designers, users (not always the same) – as well as the gatekeepers – on what it means to “be online” not just to learn key digital literacy skills. More policy-focussed research is necessary in this area, especially given the current technological era we are thriving in.

Indian and Fusion Cooking in America

Expertise in sustainable ICT4D for the developing world

Talking about information and communication technologies and socio-economic development